Book Us For Your Next Event

Book With us Today 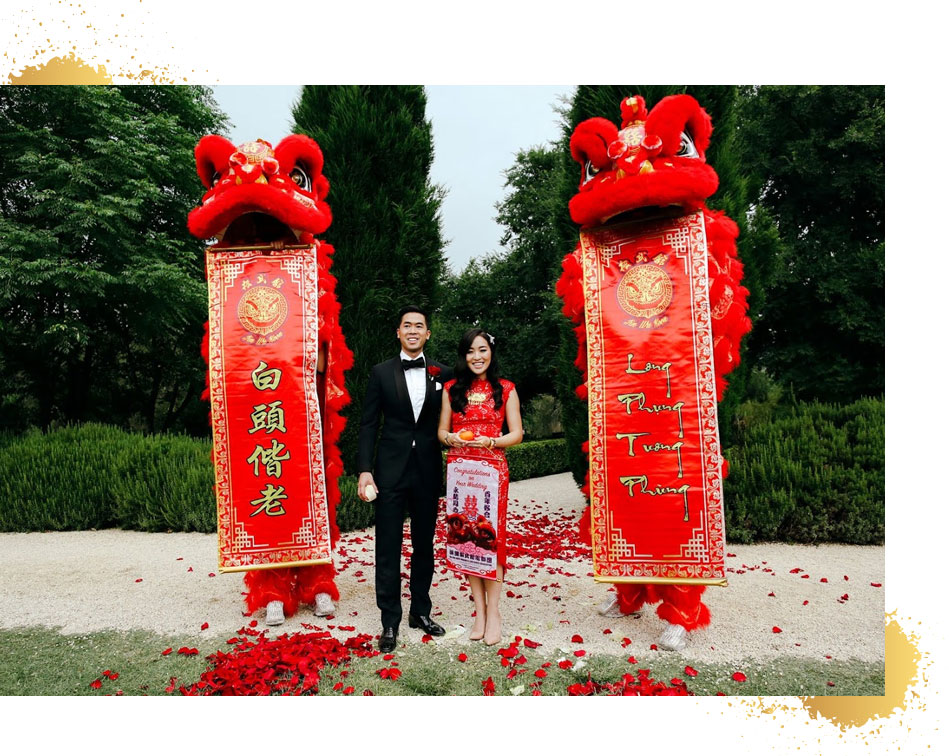 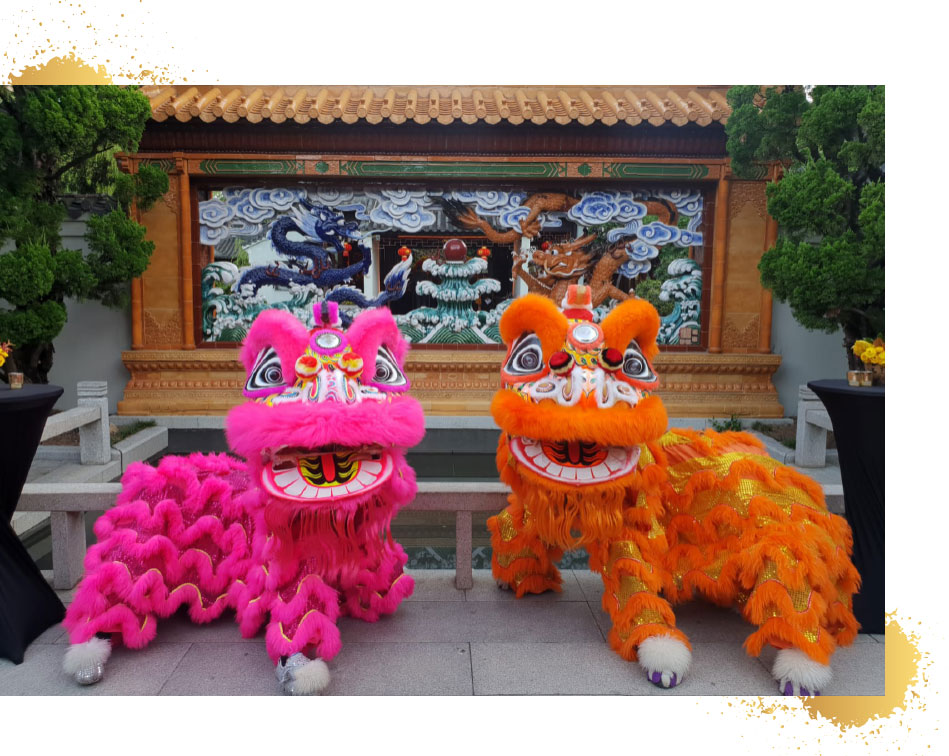 WHAT IS DRAGON & LION DANCING?

Dragon and lion dancing are two of the most vibrant dances performed in  Australia. They emerged more than 1,400 years ago in the Tang Dynasty (said to be the greatest imperial dynasty in ancient Chinese history) and are performed at royal wedding to bless the health and wealth of the king and his court.

The dance has changed over time, but its intent remains – to drive away evil spirits and bring luck to the audience. Most often seen in Asian cultures during traditional Chinese festivals, dancers wield a wooden rod in each hand to control the movement of the lion’s head and body.

This is followed by the sound of drums, cymbals and gongs that are synchronised to the lion or dragon’s dance and rhythm movements.

Jin Wu Koon is one of Australia’s oldest troupes, founded in Sydney’s Chinatown in 1977. Our vision, is to combine Art x Culture x Sport to the highest level as we believe these three aspects of dragon and lion dance are the reason for the ever so progressive development of this ancient dance.

Throughout this time, we have represented Australia in various competitions across the globe (including China, Hong Kong, Malaysia and Singapore) and were crowned ‘Western Lion King’ at the Genting World Lion Dance Championships in 2016.

Our performances combine modern movements, rhythms and props, which compliment traditional techniques to create contemporary shows for any celebration. We embrace the long history of Dragon and Lion dancing while continually pushing the envelope to create exciting bespoke performance solutions.

Our dedicated team always aims to foster the appreciation of Chinese customs and traditions within the Australian community. As one of the oldest troupes in Sydney, we have also built strong relationships with communities and cultural groups, often combining to create unique multicultural performances.

We are best known for lion dance on poles where we have represented Australia in competitions in countries across the world (including China, Hong Kong, Malaysia and Singapore), and were crowned ‘Western Lion King’ at the Genting World Lion Dance Championship in 2016. Our coaches have decades of experience who seek further training and development from the world’s foremost masters and athletes. 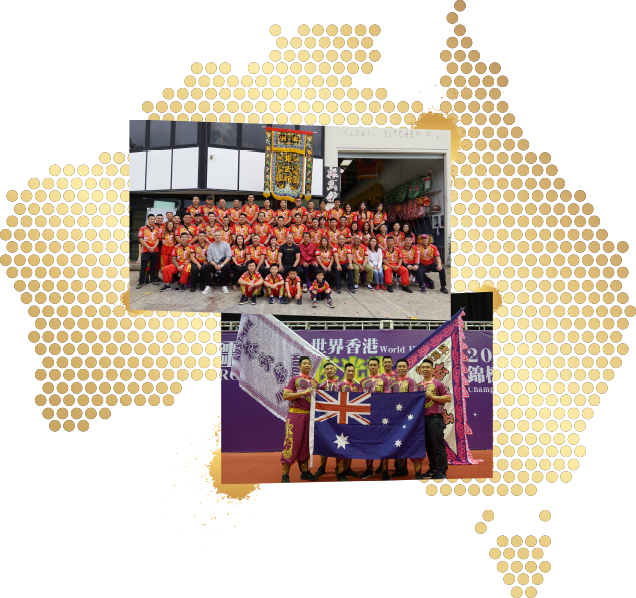 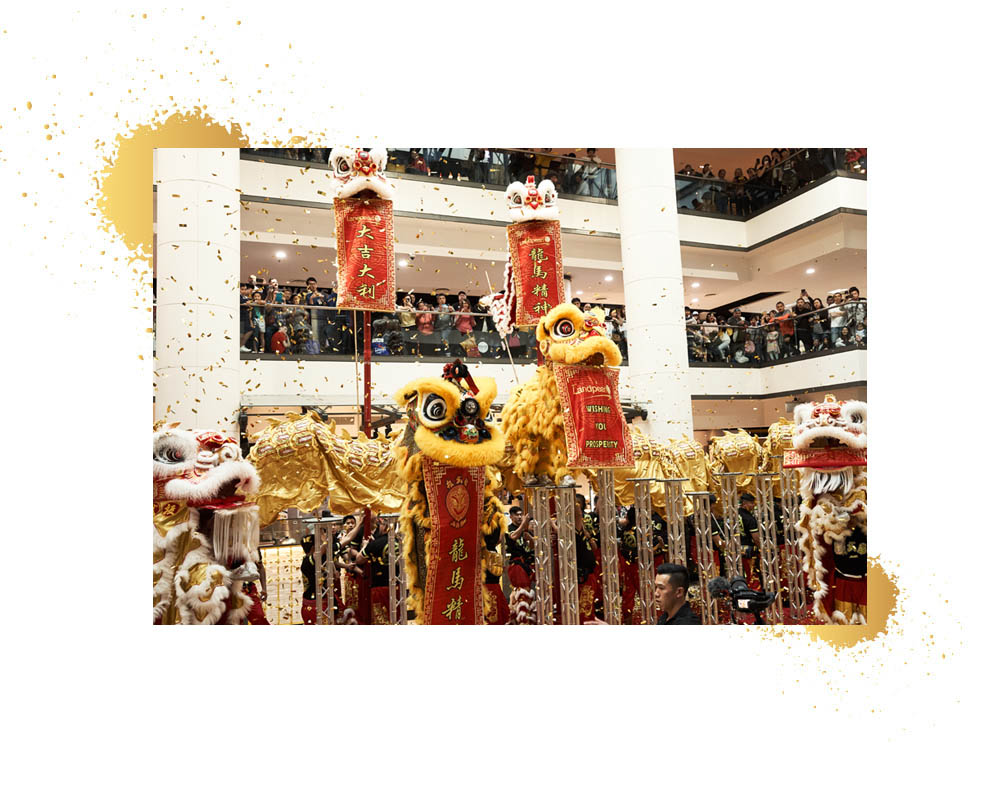 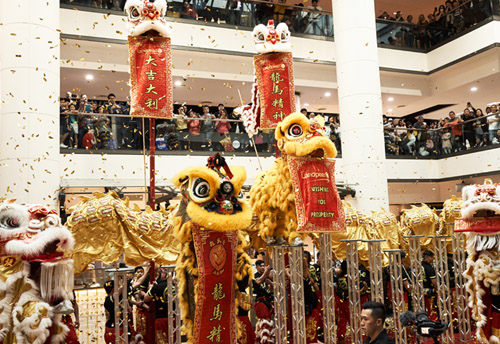 STANDING OUT
FROM THE PACK

Our troupes maintain a rigorous training schedule to ensure we are ready for all types of events and performances. We use modern props in our performances without compromising the traditional culture, beauty and history of the lion dance.

We are the proud owners of the largest lion head in Australia, which has become a renowned crowd pleaser. Each performance lasts for 10 to 15 heart-pumping minutes! 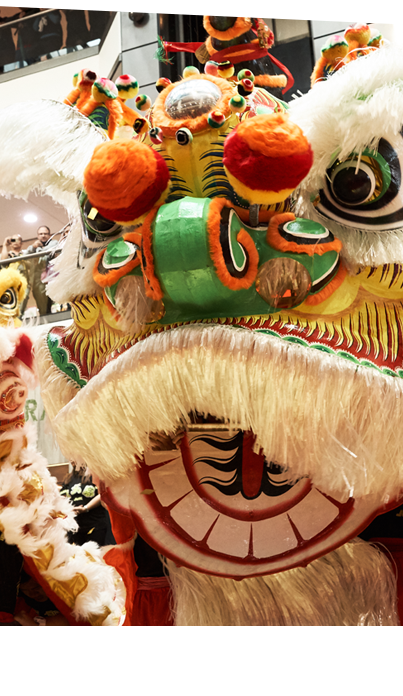 TYPES OF PERFORMANCES
WE SPECIALISE IN

You will see our lions jumping on poles up to three metres in height and across a distance of up to two metres.

Each routine we perform will be different, with abundant possibilities, including fire hoops, high wires and falling poles. 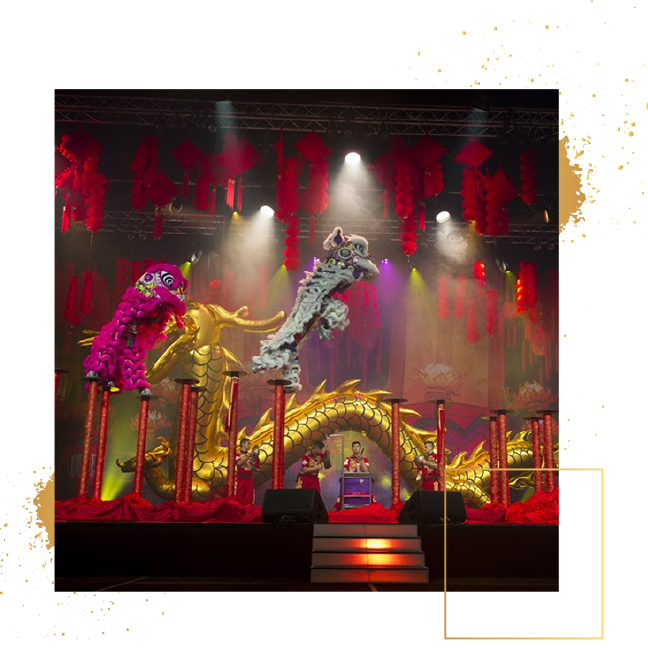 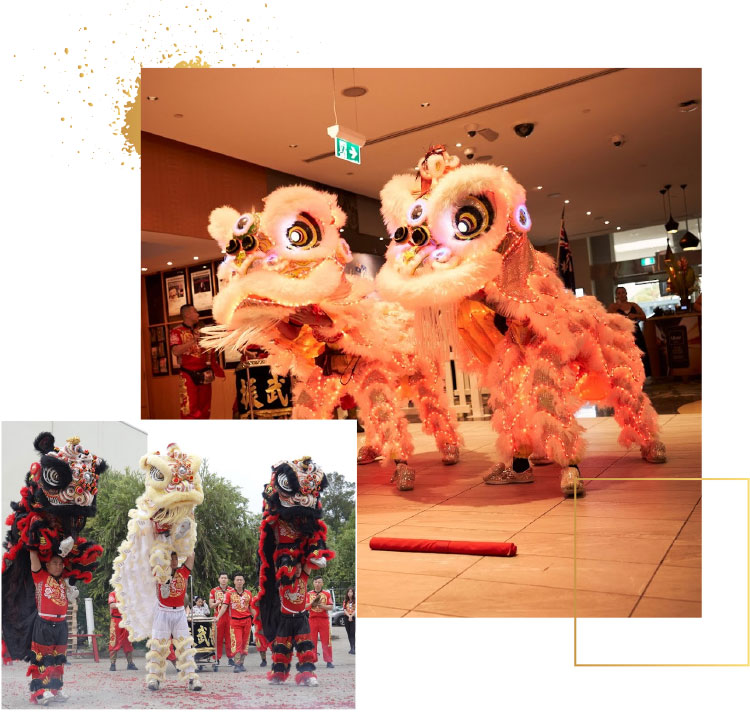 You will be astounded by the acrobatic stunts that will be seen as part of our traditional floor performances.

Expect to be amazed by the coordination and energy of the lions (there will be several at any one time!) as they perform their dances.

Any size venue can be accommodated for traditional floor performances. 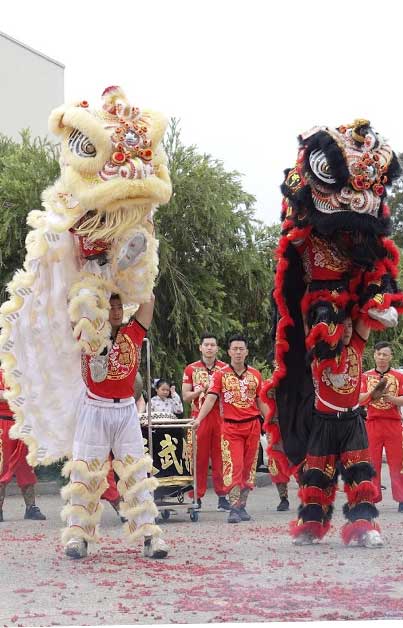 Watch our colourful, 10- to 15-metre dragons loop in and out of the crowd while performing fast, acrobatic movements as part of our signature dragon dance.

This is perfect for large and outdoor venues! We have several vibrantly coloured dragons that we use, including an LED option for night-time performances. 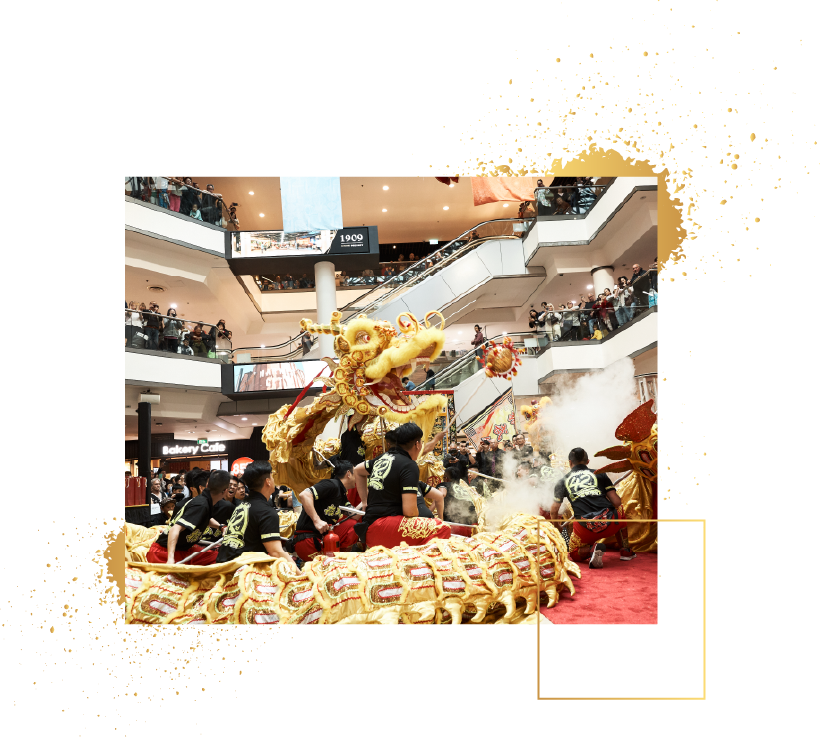 Get excited
to be entertained

We engaged Jin Wu Koon to perform at our firm for Chinese New Year. Their performance was splendid and entertaining! All our clients, friends and staff all enjoyed it. I highly recommend them to perform at your next event / wedding / function if you want to get the crowd going!

An amazing performance and excellent customer service. The team at Jin Wu Koon attended to matters promptly and professionally. An unforgettable performance! Would highly recommend to anybody seeking Dragon & Lion dancing

Jin Wu Koon preformed lion dancing for our Wedding Reception and boy did they deliver. Performance and crowd interaction (table to table) was amazing. Everyone loved it.

Thank you guys so much for the entertainment you provided for my wedding. All the guests enjoyed it, were amazed and absolutely made the experience all the more enjoyable.

Very nice group of young people who did an outstanding job helping us celebrate a special birthday. Very energetic, very accommodating – everyone enjoyed it immensely, it was a great hit! Highly recommended.

Amazing performance and super easy to work with! They were really flexible with our space and requirements 🙂

Willis and his team did a fantastic show on our ANZ Lunar New Year event, thanks again for your wonderful performance and see you next year.

No matter how big or small, commemorate your next milestone with a dragon or lion dance performed by Jin Wu Koon. We have fused modern costumes and props with traditional values and techniques for a meaningful and memorable experience that will be enjoyed by everyone.

Our bespoke lions and powerful performance will captivate your guests and create an elevated atmosphere like no other.

While a company launch, wedding and birthday are very different events, commemorating the occasion with a vibrant, high-energy dance such as the dragon or lion dance is not only highly entertaining but also believed to promote good luck for the year ahead. 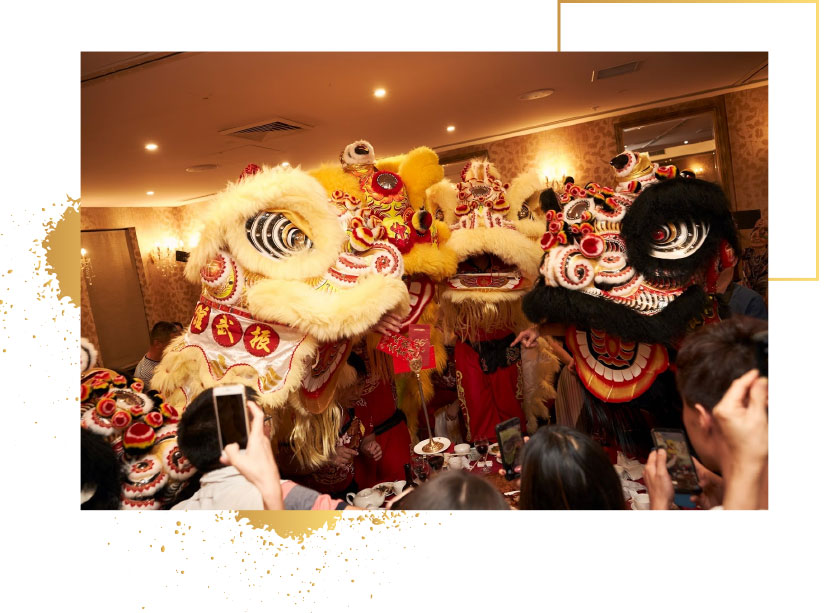 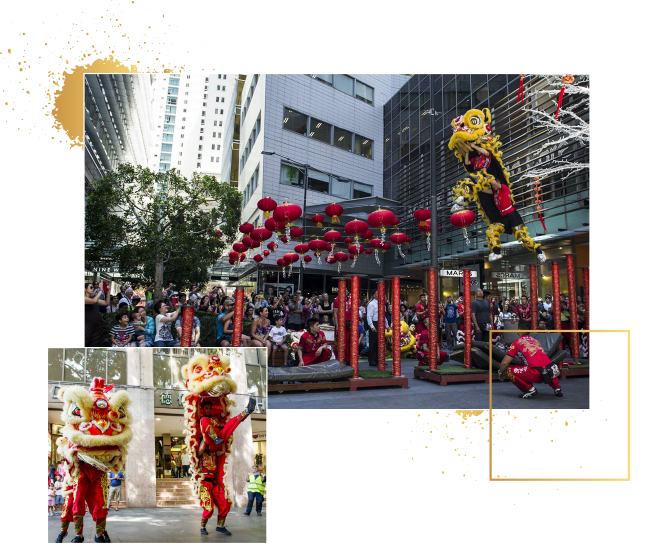 Dragon or lion dances are most commonly recognised for their presence at traditional Chinese festivals. If you have ever been to an event like this (such as Chinese New Year), chances are you have seen our famous lion’s head.

It’s currently the largest in Australia!

Join one of the premier dragon and lion dance troupes in Australia as we are strive to pass this Art x Culture x Sport onto generations to come.

You will learn modern day dragon and lion dance teachings with traditional values that have been passed down for hundreds of years.

Training is free. Contact us now to ask about joining. 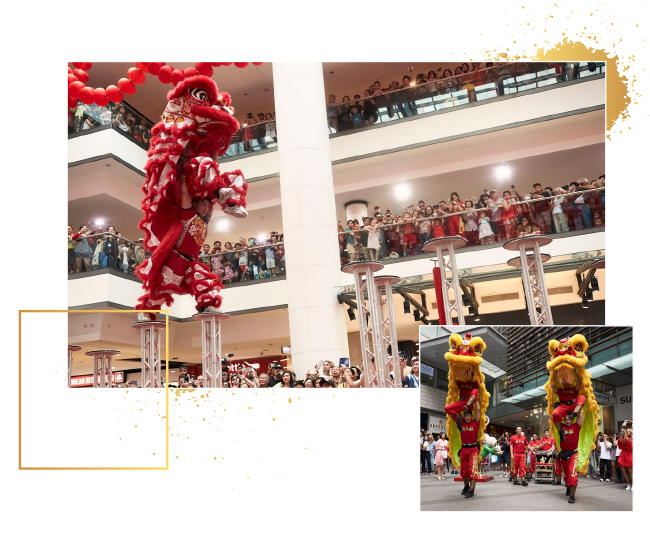 Book A Consultation With